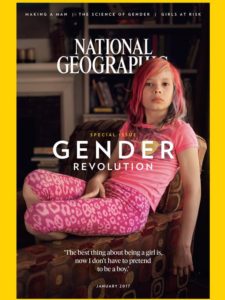 It’s Nauseating and Smells Like Crap…
…We Don’t Notice Anymore.

Have you ever noticed that your brain seems to normalize bad smells after a while? For example if you’re a parent and you’re cleaning up throw up, or a really messy diaper, you may heave at first but after a while you kind of get used to it. It’s not until you finish and go outside in the fresh air that you realize “man that was disgusting“. This is called sensory adaptation.

Our world is like that. Our nation is like that. Our politics is like that. Our religion is like that. Change something slowly over a long period of time and most people will simply adapt and not question why white boys want to be girls, why black women have trouble finding a family oriented black man, or why gay people support Islam, or why the best system ever devised for how to govern a country is being corrupted to the point a sizable majority of it’s citizens want socialism… the list goes on and on.

It stinks, I mean it really, really stinks, like a porta-jon at an outdoor concert that’s overflowing… one that you can’t even get close to without wanting to throw up… we have just been slowly tricked into thinking it smells good.

Our brains are malleable. Our concept of reality is malleable. Dr. Anthony Napoleon (his books, website, and white papers are listed in the right-hand column – read them) a noted clinical and forensic psychologist, and expert on psyops, says that given a little time and effort he could, without you even being aware of it, make you think dog poop was apple butter and you’d spread it on your toast and smile while eating it. Disgusted? Hard to accept? Take a look around… really take a look around… the media entertainment complex has been programming minds for several generations now. Are the results any less disgusting? No, they’re not. They’ve convinced parents that anything is OK, if your preteen thinks he’s a girl, or she’s a boy, it’s perfectly OK to have a surgeon perform an operation to mutilate them and give them hormones. If you did a little research, you would find that the doctors who know better, who have stood up for what’s right, have been forced out of the medical and university systems. What’s more disgusting than that? What about pedophilia? It’s being mainstreamed. Articles have been appearing categorizing pedophilia as nothing more than a sexual choice such as being gay or straight.

The total destruction of anything good, wholesome, and strong has been targeted for years and will continue to be targeted until the average citizen is a low IQ, low achieving, emasculated worker, enslaved to our debt, too high, too medicated, and too absorbed in reality shows and social media to care.

Compare old movies and TV shows from the 50s, 60s, even 70s, to today’s. Differences will literally jump out at you. How are white men portrayed then vs. now? How are black families portrayed then vs. now? Look at what the media entertainment complex has done to black families… black Christian families are one of the strongest building blocks of this country, followed by white Christian families. Shame vs. acceptance of any flavor of sexual exploit, drugs, drinking, etc.?  Try to find the rare TV advertisement that shows a white male as smart, responsible, and capable (probably will not be from a US based company). When watching a current movie or TV show, especially a children’s movie or TV show, play “spot the psyops”… it’s fun.

Why do you think the Obama administration has, below the radar, brought in thousands and thousands of refugees from violent Islamic countries while leaving the few Christians there to be exterminated?

It smells bad, really, really bad, but most people no longer notice.

Why do you think they hate Donald Trump so much? Because he can still smell the nauseating stench of what is being done to this world and our country. Because he’s an alpha male in a country where alpha males have been targeted for extermination.  Because he’s leading a charge to stop the globalization and take over of the last bastion of hope.

Read my previous post about this Forced Into the Transgender Blender…

Update 1/31/2017: The Boys Scouts of America Welcome Transgender Scouts. The Boy Scouts of America have announced that they will now allow transgender scouts… in other words girls who think they’re boys, with no regard for their real gender.  The Girl Scouts had previously made this same decision.  The progressive left has been working towards this for a long time – completely ruining an Institution that turned out well-rounded young men who were good citizen and patriots.  Few people will even give it a second thought… dog poop or apple butter, you tell me.

« Veteran’s Day 2016 – Five Minutes in Hell…
Stolen Future: Almost Everything You Think is True is a Lie »